One of my side projects at Couchbase is a Graph-API on top of it. This article explains how you can use the Rexter Graph Server with this implementation of the Blueprints 2.x API.

There is a forked version of Rexter available here: https://github.com/dmaier-couchbase/rexster .

However, the modifications are quite simple.

I disabled the enforcer plug-in in the main pom.xml file.


Also the file 'rexter-server/config/rexter.xml' was edited in order to use the Couchbase instance.


To have this working it is expected that you have previously built CBGraph and that it sits in your local Maven cache. It can be found here: https://github.com/dmaier-couchbase/cb-graph

Your Couchbase connection is currently configured via the file 'couchbase.properties' which is part of the source code of CBGraph.


So the steps are:


Rexter's target folder now should contain a folder which is called 'rexster-server-2.7.0-SNAPSHOT-standalone'.
You should see a message like

Now let's play a bit with the Rexter REST interface:
You can also browse the Graph via Rexter's UI:  http://localhost:8182/doghouse 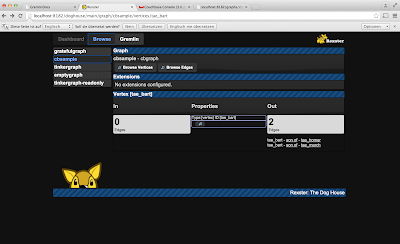 I am running Docker on MacOS which means that 'boot2docker' is required. Because Docker is using Linux kernel features,  a Linux-VM with a Docker daemon is running in the background. So this VM is used to host our containers.

Couchbase has now a fully supported Docker image. So the installation of a node is quite simple:


This starts a container in a daemon mode with the id 'couchbase-1' by using the Couchbase image. Ports are exposed/mapped to the outside.

In order to double check which containers are running use the following command:

To see the port mappings, the following command can be used

This gives me the following output for my first Couchbase node:

The internal IP can be determined by using Docker's exec command:

So far so good. But how to build a cluster?


Additional containers could host applications. By default my containers could reach each other via the internal IP addresses. I think it will be more challenging to access the Cluster from the outside even if the ports are mapped, but the idea here is anyway to deploy especially your applications via Docker. Access from the outside would need to configure the used Couchbase client library specifically regarding these port mappings. Also, here some further details about Docker's networking: https://docs.docker.com/articles/networking/ .

!Important! The Docker trend causes that containers are used within VM-s (those are deployed via IaaS cloud systems like Amazon EC2). I even saw it in a VMWare environment whereby the intention was to use the VM-s more efficiently and to unify the application deployment process. So what you see there are multiple containers per VM. Unlike Application Servers, Couchbase is designed to use dedicated resources, so for instance a specific per node RAM quota. The cluster is sized in a way that it fits your requirements, so it's not expected to have a real waste of resources in this case. Especially for performance critical use cases it would NOT follow Couchbase's best practices to run Couchbase Server in a container (Docker) which is again running in a container (VM).
This is especially underlined by the documentation of the Docker image: https://registry.hub.docker.com/_/couchbase/ . There you can see that the only productively recommended deployment is the one which is named 'Multiple hosts, single container on each host'.

Feedback is highly appreciated! :-)
Posted by David Maier at 22:57 1 comment: