This article aims to spot a light on asynchronous data processing in the Java world. But let's at first talk a bit about the difference between synchronous and asynchronous operation execution.

An asynchronous execution, on the other hands side, means that the client is just performing operation calls (requests) to the server by not waiting for the immediate result. The client is not blocked and just continues to perform operations calls. Therefore the result which is returned by the server has to be handled as soon as it arrives at the client side. The order in which the results are arriving may not be the same as the order of the original requests. The function which is handling this 'in the future' arriving result is normally named a Callback Function. 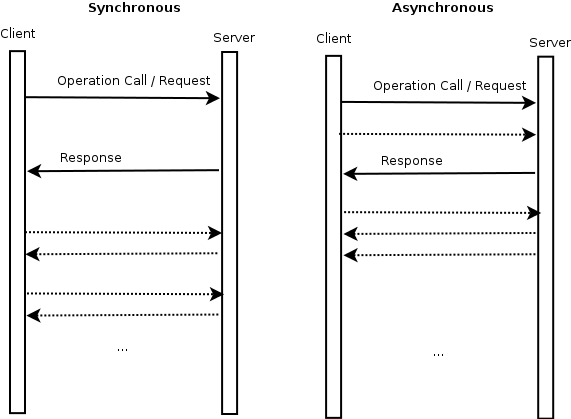 Several programming languages (and more specific the frameworks those are related to them) have this concept implemented. E.G: Java has 'Futures' and AngularJs (an MVC framework from the Java Script world) has 'Promises'.

Let's focus on Java for now. So let's at first take a look on 'Futures'.

'java.util.concurrent.Future' is an interface which provides the following methods:

BTW: Futures are used in the Java world related to multi threaded execution. Work is submitted to an ExecuterService. A thread pool can be used to paralyze the workload. Because one thread may be faster than another one, the result may not be returned in the same order as submitted. This means that the result is returned asynchronously.

If you use Couchbase's earlier Java Client (1.4.x), then you will realize that an asynchronous operation will return you a Future object.


Furthermore it is extending an 'AbstractListenableFuture' which allows you to attach a listener (similar to a Callback Function) to the operation.

OK, so this is how things are working with the Couchbase 1.4.x Java Client. Things are becoming even cooler with the new 2.x version because the new Java Client uses ReactiveX for Java (http://reactivex.io). So let's start to talk a bit what ReactiveX is and which pattern can be implemented by using it.


In JavaRx, such an Observable object can be used in a similar way as a Java Iterable (E.G. using methods like 'skip', 'map', 'forEach'). The difference is that you just consume data from an Iterable (pull access) but you also produce (push access) data regarding an Observable. There are two new methods available for an Observable:

Here an example how you can interact with an Observable:

So let's finish this article by showing how Observables are used in the new 2.x Couchbase Java Client:


A more advanced example can be found in Michael's blog post about the new Couchbase Java SDK or in Phil's demo application.